In order to understand the development of the fire company it is necessary to take a look at the community in the late 1940’s and early 1950’s. The community was rural with the local economy driven by agriculture. The only local jobs outside of agriculture were at Bata Shoe Company, Edgewood Arsenal, or Aberdeen Proving Ground. The towns of Bel Air, Aberdeen, and Havre De Grace were the commercial hubs in the county. The citizens who were not employed in the county commuted to the Baltimore area and were employed by companies such as Glen L. Martin, Bethlehem Steel, General Motors, Western Electric, or a number of smaller businesses. The area known as Joppa was centered around the small Post Office on Joppa Road between Route 7 and Route 40. There were several general stores in the area and businesses along Route 40 some of which were moved from Route 7 after Route 40 was built in the early 1940’s. The area known as Magnolia was an unincorporated town located along the Pennsylvania Railroad tracks west of Route 152. It predates the 1917 development of the Edgewood Arsenal and was the scene of a confederate raid during the Civil War to destroy the railroad station and bridge over the Gunpowder River. The Pennsylvania Railroad maintained a station at Magnolia to serve southern Harford County.

After World War II the United States and Soviet Union became world super powers and engaged in a nuclear standoff known as the Cold War. The threat of a nuclear attack was particularly felt in Harford County due to its proximity to Washington D.C. and the perceived target areas of Edgewood Arsenal and Aberdeen Proving Ground. The schools held regular air raid drills in which the students would get under their desks and cover their heads. There were air raid shelters stocked with food and water and some homeowners even built private air raid shelters for their families. At the time fire protection in this area was provided by Abingdon, Bel Air, and Cowenton Volunteer Fire Companies, Ambulance service was provided by the Edgewood American Legion and the State Police. Kingsville had not yet organized and Abingdon did not provide ambulance service.

The community business people and land owners formed a civic association in the Joppa-Magnolia area and met regularly at a building on Magnolia Road near the intersection with Sugar Hill Road. The building still exists at that location. It was from this group that the idea of a community Civil Defense group was raised in 1951. They decided to organize a public meeting at the Lakeside Restaurant meeting room to get community input on this idea. William “Doc” McShane, a Biologist at Edgewood Arsenal, was to chair this meeting. At that meeting other proposals including forming a volunteer fire company were offered. The proposals were evaluated and the volunteer fire company was agreed upon. “Doc” McShane became the Joppa-Magnolia Volunteer Fire Company’s first President. Many members of the Civic Association became charter members of the fire company. The fire company was incorporated on September 20, 1951. The minutes of the fire company’s first meetings were either not recorded or have been lost. The first meeting that we have minutes of was held on February 11, 1952. The fire company had placed an ad in the Army Chemical Center Edgewood Bulletin advertising for members and fire equipment. The Fire Chief from Delta-Cardiff Volunteer Fire Company attended the meeting and offered a 1924 American LaFrance pumper to the fire company at a cost of $1.00. The Chief explained the truck needed a new tank and a tune up. The truck was purchased from Delta-Cardiff and was used in fund raising activities. In April of 1952 the fire company accepted the donation of property for a fire house from Mr. William Filbert. The first section of what was to become Joppa-Magnolia Volunteer Fire Company House 1 was built by the members and completed by December 1952.

The new fire house had two equipment bays and a hall on the second floor. (The equipment bays were converted into administrative offices in 1997) The bay doors were eight feet high which was adequate for the equipment at that time. When the fire company purchased the 1964 Mack engine, the rotating beacon light that is usually mounted on the roof had to be placed on a shelf above the windshield so the engine would fit in the bay. The 1968 Mack was also modified the same way.

The fire company replaced the 1924 American LaFrance with the purchase of a fire engine from Cowenton Volunteer Fire Company (Now White Marsh VFC) for $275.00. It was a 1934 Ford that had been a school bus and was converted to a Civil Defense pumper during World War II. It was the first fire company engine to be used in firefighting and answered the first fire call for the company in January 1953. By this time there were nineteen members who completed the University of Maryland Basic Fire Training Course taught at Joppa by Aberdeen Proving Ground Fire Chief Daniel B. Smith Sr.

The first fire call of record was answered on January 11, 1953. It was a building fire at Allen’s Cabin Towne at Route 40 and Joppa Road where the Sheetz is now located. The call was received by the telephone operator at the Wilna exchange located on Old Joppa Road north of Mountain Road.  The operator relayed the information to Edgar Williams by telephone, Edgar then called 1st Lieutenant Harold Spicer. The members were called in a pre-determined order to respond. Fire Headquarters was not   established until 1955. It was then located on the second floor of the Belair Volunteer Fire Company fire house. The Harford County Civil Defense eventually supplied a siren to be installed on the fire house. Then the first member notified of an alarm would go to the fire house and push a button on the front of the station to activate the siren.

The new fire company recognized the need for a more modern fire engine so in April 1953 a new Dodge cab and chassis was ordered from Smith Motors in Cowenton. The truck was delivered to the fire company and then driven to the Oren factory in Roanoke, Virginia to have the body, pump and water tank installed. The completed engine was placed in service in the fall of 1953 at a cost of $10,650.00.

The fire company served as a community center not only with the fund raising activities but also sponsored two girl scout troops and 1 boy scout troop. Classes were held at the fire house with the fire company boy scout troop and the troop from Mountain Christian Church. At the end of the class twenty firemanship merit badges were awarded. The company approved the organization of a band under the leadership of John Holter. The band marched in many fire company parades throughout the area and played at other functions as requested. The company had hospital beds and wheel chairs available for citizens to borrow when needed. The beds and wheel chairs were donated to the Abingdon VFW in 1965 so that one organization could provide this service. In the early 1990’s the fire company began a fire cadet program for youth interested in firefighting. Many of these young people became members of the company when they became of age.

The ambulance service was established in 1953 with the donation of a 1942 Cadillac by Paige Richardson of Richardson Motors and John Wilkinson Jr. of Wilkinson Insurance Company, both located in Belair. The first ambulance call of record was answered on July 9, 1953 with Calvin Cornes driving and Jimmy Cloman attending. The patient was transported to Perry Point Hospital. The addition of ambulance service required the firehouse to be expanded. Footings for the addition were begun in February of 1954. The addition included a lobby area, rest rooms, expansion of the upstairs hall and a third equipment bay in the rear of the front engine room. The fire company was officially dedicated on October 15th 1954.  By the end of 1954 the basic fire class of 1953 had completed the advanced course and a second group had completed the basic course. The first aid personnel had completed the American Red Cross basic first aid class. The fire company had 75 members, 37 Administrative, 12 firefighters, 2 Ambulance, and 24 Firefighter/Ambulance personnel. In February 1955 the 1942 Cadillac Ambulance was replaced with a 1948 Cadillac purchased from Aberdeen Volunteer fire company. The Ladies Auxiliary paid for a new motor for the Ambulance and Charter Life Member Calvin Cornes donated the labor to install the motor.  In 1955 the fire company also purchased a 1934 Mack pumper to replace the 1934 Ford pumper.

In these early years of development for the fire company many people and companies gave time and services to help the fire company develop. The department of Civil Defense gave guidance and equipment including the siren for the firehouse.  Keithley Brothers Garage towed equipment without charge and repaired fire equipment.  S.H. Anderson Hardware provided materials, equipment and labor during the building of the firehouse and whenever needed after the firehouse was completed. A & L Motors, John Anderson, allowed his employee, Clarence Greenfield, whatever time was needed to assist the fire company. L & H Cleaners in Edgewood cleaned all the linen and blankets for the ambulance free of charge for many years. The Maryland Forest Service provided brush fire fighting equipment and tanks with pumps for the brush vehicles. William Filbert donated the land for the fire house. The Ladies Auxiliary to the Joppa-Magnolia Volunteer Fire Company organized in 1953 and began their support of the fire company.

The fire company continued to grow adding a 1953 GMC 1200 gallon tank truck purchased from Aberdeen Proving ground through the Civil Defense in 1958. They also purchased their first new Ambulance. It was a Cadillac Miller Meteor placed in service in January 1959. The fire company now had two ambulances in service. The fire house was again expanded adding 3 new bays on the rear and a larger hall with a kitchen on the second floor.

Photo of the Day 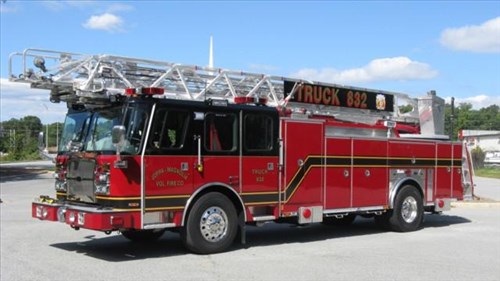